Greece has over 16 thousand kilometers of coastline and is a scuba diver’s paradise. Diving was previously quite restricted due to local laws, but today it is quite a popular activity. The National Herald recently published the following report on the seven best spots to scuba dive in Greece, according to Ellie Coverdale, a travel writer at UK Writings and Boom Essays.

Crete is a wonderful place with great scuba diving, especially in Schinaria, south of Rethymno. This is a little beach with an impressive seabed where you can find moray eels, black-fish, octopus, and many other marine species on regular dives. Schinaria Beach is also well known for its amazingly clear waters and great visibility, and most dive shops in Crete offer a regular dive trip to this location. This should definitely be a must if you like a dive with diverse marine life.

2. Wreck of the HMHS Britannic, Kea

If you’re more of a fan of wreck diving, that’s also great news because Greece has some of the most famous and amazing wreck dives in the world. The HMHS Britannic is a sunken WWI hospital ship that went down in 1916 of the coast of Kea, a small island also referred to as Tzia. This is not a dive for beginners because it is quite deep and a more complex wreck dive, so dive trips here will only accept advanced divers.

Santorini is a volcanic island which has fantastic opportunities for scuba diving. One of the top spots is known as Nea Kameni and is the site of a spectacular volcanic eruption. There is a lot to see there from exciting and diverse marine life to another wreck dive to underwater sea caves. The wreck is the Santa Maria, a 34 meter long steel passenger ship that sank in 1975 in Taxiarachis Bay. Because it’s only 18 metres deep, it’s perfect for scuba divers of all experience levels. Nearby, the volcanic eruption created amazing underwater lava formations and sea caves that are all incredible to explore.

The Mirmigi Reef is located on the northwest coast of Lesvos, also known as Mytilini, close to the village of Petra. This is a very popular dive site and for obvious reasons: it has an abundant marine life, really interesting and beautiful topography, and volcanic formations underwater. Jamie Cooke, a sports blogger at State of Writing and Paper Fellows, tells us that “it’s good for beginners as well as advanced divers because the reef starts at a depth of five metres and progresses down to a depth of 36 metres. There is excellent visibility here and no currents to speak of, making it an easy and rewarding dive.”

5. Wreck of the HMS Perseus, Zakynthos

This Ionian island known as Zakynthos is an ideal destination for all travellers because it has a picture perfect coastline, jaw-dropping beaches, and a lively nightlife. It’s also a well-known scuba diving destination because of the famous wreck of the HMS Perseus. It’s an interesting wreck because it’s different than most – it’s actually a sunken British submarine from 1929 that sank in 1941 during the Second World War after it hit an Italian mine off the coast. The wreck is 52 metres below the surface so it can only be accessed by very advanced divers with deep diving certifications but it’s a favorite wreck dive for obvious reasons.

Crete has a highly special and exciting dive site near Chania called the Elephant’s Cave that is well worth exploring. It’s a partially filled underwater cave near the Drepano area in Akrotiri. Not only does it have stunning red and white stalagmites and stalactites, but it’s also an unforgettable cave dive for experienced divers with cave diving experience. As Roberta Earp, a travel writer at Academized and Australian Help explains it, “the cave has been shaped through millennia and once inside you can find fossilized remains of an extinct type of elephant including its vertebra, its teeth, and a single tusk. It’s also possible to see remains of other animals fossilized in the cave.”

Another Zakynthos dive site is off its coast, beside the uninhabited island of Marathonisi. It’s one of the principal nesting zones for the Caretta sea turtles so scuba divers here will be rewarded with sights of loggerhead turtles swimming all around. Not only that, but it’s fairly common to get a sight of other local species like flying fish, octopus, eels, and parrotfish.

Ellie Coverdale is a travel writer at UK Writings and Boom Essays. She has explored many different and offbeat destinations and loves sharing her travel insights with her audience. She spends all of her free time outdoors being active, and you can also find her articles at the Essay Roo blog. 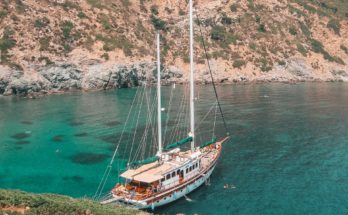 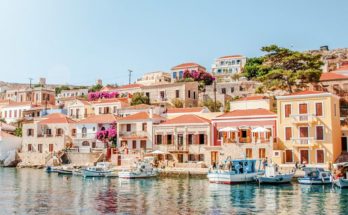 Halki, the small paradise island of the Archipelago 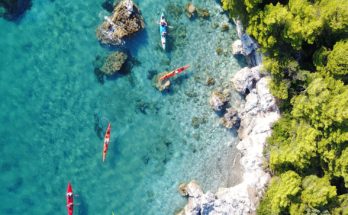